I have been neglecting this blog for weeks, ever since I began posting more scholarly or professional pieces as a regular column, “Life, Refracted”, on PsychologyToday.com.   The links to those essays appear on this website, under “Articles and Essays”.  How did this come about?

In the spring of 2016, in support of Miracle at Midlife:  A Transatlantic Romance, my publicist suggested I write “10 Things About Long-Distance Love”.  Soon I realized that I had far more than ten things that were worth noting on that topic. (See 13 cautions and 10 tips.)  I also realized that any commentary should rest on a separate article about mid-life love relationships.  That, of course, demanded another article, one describing Romantic Relationships in general – and, then, of course, I had to back up to “Close Relationships”, expanding beyond those with romance at the core.  A final piece, describing Relationships more generally and their role in one’s life was essential.  And there I was – six long articles later, with many angles and featuring the work of some of my favorite psychologists as well as my own notions drawn from my consulting room and my life.  I began calling the series “Relationships Refracted”.

After Psychology Today picked up the series, four things happened.  First, we expanded the concept so that I could add comments on a broader range of topics.  “Life, Refracted” was an inspired title for a woman who aspires to see old things in new ways and from multiple angles.

Second, I needed to learn to write – and post – from a less personal and more professional perspective, yet one that was not the peer-reviewed journal writing of my earlier career as a scientist.  Both the logistics of the new format and the return to my roots in psychology raised challenges and it took time to settle into the new rhythms.  Third, I loved being able to comment on timely topics and needed the energy and attention that had gone into “Love is Real” to be redirected while I immersed myself in the learning curve.

But finally, and now most important, an idea that had begun brewing in June now seemed perfect for both my audiences.  Thus, “52 Ways to Show I Love You”, a new weekly column,  was born.  It will appear on both “Life, Refracted” (PsychologyToday.com) and “Love is Real” (miracleatmidlife.com). This week’s Psychology Today post explains the year-long initiative that will begin on January 1st.  I expect to have an RSS feed so that the fifty-two Sunday posts that will appear in 2017 on “Life, Refracted” at PsychologyToday.com will also post on “Love is Real”.  Subscribers to the latter should automatically receive them when they appear on the internet.  In addition, I will continue to add more personal pieces to “Love is Real” as well as more professional ones to “Life, Refracted”. 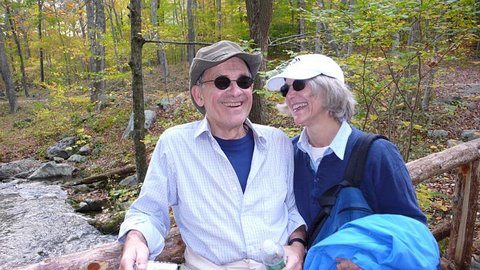 When we were young(er)

This synthesis is bringing me much joy.  Just as my book is about integrating both sides of me, of my life, the two blogs will allow me to move back and forth in writing.  And I have continued to discover how very much I love to write.  One again, love is real.  And I also love that I can share my writing with readers whom I might be able to inform or inspire or entertain.  Please share any reactions that you may have with me – or any posts that you  find particularly share-worthy with others who might appreciate or learn from them!