The funeral was short, meaningful, perhaps a quarter hour of memories and prayers.  A daughter had organized a slide show of his life, in chapters.  Childhood.  Marriage, a union that had lasted more than sixty years.  Military service.  Children.  Work.  Grandchildren.  Travel. Adventure.

The sanctuary was crowded.  He had touched many lives and we wanted to say goodbye.  To pay tribute as his soul moved on. 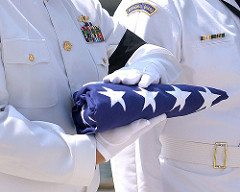 My husband and I had not been close to him and his wife.  I knew them through their oldest friends, a couple who were also friends of ours.  But I had always liked them so much.  He was cheerful, always able to see a bright side.  He used all the resources at his disposal to spread joy.

He took slide shows of his travels to foreign lands and visits to the national parks on tour.  He had created more than a hundred of them. Residents in Westchester’s nursing homes knew him and his talks well.  They were highlights in any week in which they were scheduled.

At the cemetery, we sat in our cars, a long line of flashing hazard lights. People of all ages, growing restless in the humid heat of late August.  He was a Veteran.  We were awaiting the military honor guard who would play taps and fold a flag that had been draped across his casket.

I do not know what people in the other cars did.  I sat in silence, thinking of the life now gone, the legacy that he had left behind.

At his funeral, his daughter had spoken of Ferdinand the Bull, a favorite children’s book that they had read repeatedly.  That she had then read to her own children.  He had loved that story, considering himself also a bit out of step, taking time to “smell the flowers” and appreciate the beauty and wonder in life.

Now here we were, waiting to listen to a few last words from the Rabbi, sprinkle dirt upon a lowered casket, and say Kaddish for him together for the first time.  We left our air-conditioned cars and gathered at the gravesite.

Two soldiers in dress uniforms marched to the casket, saluted each other.  The woman played a haunting rendition of Taps on her bugle. Shivers shook my body, in spite of the ninety-plus degree heat.  The man, ”Honor Guard” discretely embroidered on his sleeve, initiated the flag-folding ceremony.  With precision and the utmost respect, the two presented the flag folded into its perfect triangle to the widow.

We followed the grave-diggers as they shepherded the casket  into the hole that had been dug.  The Rabbi spoke.  Many of us shared the Jewish ritual of shoveling dirt on top of the pine box.  The first several clumps landed with a resounding “thud”.  Silently, somberly, we recited the ancient Aramaic prayer that celebrates life.

Some of us stopped to share hugs with members of the family or with each other. We returned to our cars, to our lives.  Most of us had canceled other plans that Friday.  Pausing to honor a good man, a man who had lived a generous life to its end, in spite of suffering from a terminal disease he could no longer resist.  To think a bit about our own lives, how we were living them, the legacies we might leave.  To consider the question, have we indeed loved with all our hearts? It matters.  Indeed, Love is Real.