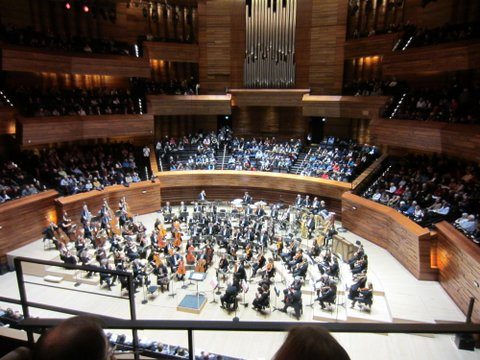 Last night David and I attended a concert at the Maison de Radio France.  David had purchased tickets months ago, securing seats in the first balcony of the magnificent renovated Auditorium, reopened on November 14, 2014.   Architecture combined with aesthetics to render acoustics astonishingly clear.  After a short walk from where we stay when in Paris, we arrived on a balmy December night to join others in the reassuring Security lines in front of the main entrance.  Soon seated in the second row from the front, we, like everyone in the auditorium, enjoyed unobstructed views.

The large orchestra sits on a platform in the center of the room. Walls are swathed in wood. Tiers of seats on the surrounding balconies are covered in materials that help absorb sound waves, allowing the soft resonance of the instruments to reach the suspended microphones that transmit the concerts to listeners at home as well as to the  eager ears of the audience.

The woman who played first violin entered, followed by the Director of Orchestre National de France, forty-year old wonder Andres Orozco-Estrada, conducting. The gilded harp, eight bass violins, 10 cellos, a bass trombone, and other brass, strings and percussion instruments had already claimed their places along with musicians who easily carried their instruments.  The overture to Leonard Bernstein’s Candide  exploded into the space.  We sat spellbound through its brief six minutes.

A full orchestral rendition of George Gershwin’s  An American in Paris enchanted us.  David and I both had images of Robert Fairchild holding us mesmerized as he danced across the Broadway stage of the recently opened musical adaptation.  Later we had gasped as he interpreted Christopher Wheeldon’s adaptation of Rhapsody in Blue – American Rhapsody –  but the Gershwin score had never sounded as rich, as grand, as astonishing as it did last night.  Darius Mlhaud’s Le Boeuf sur Toit, opus 58, with its Latin American beats played on wooden instruments followed, then an intermission.

By that time, our attention had been drawn to a few specific musicians whose energy seemed extraordinary.  Their love of their instruments and for their music radiated from them, two of them quite still and contained in style, two others almost dancing in their seats as they played,  The woman on First Violin.  The man who played the cello.  The man on what seemed to be some kind of extended oboe reverberated elegance, from his snow white hair to his patent leather shoes, his cuff-links glittering as they peeked through the sleeves of his coattail tuxedo.  His white tie was knotted into a perfect bow.  The woman on the first oboe played her heart out, especially during some wonderful solos, her enthusiasm and joy radiating through the notes.

There were others.  The percussionist who switched between Brazilian beats tapped on wooden instruments and kettle drums when, following the intermission, Dvorak’s Symphony No. 9 in E Minor – New World Symphony – held us enraptured throughout its 43 minutes (“approximately”, according to the program).

Ovations followed.  The audience insisted that the musicians accept their appreciation.  The Conductor asked the orchestra to turn in all directions in order to face all the appreciative fans. We left the Auditorium of the newly renovated building filled with the beauty of the music, the performers, and the feelings that had been created within those of us who were present.

Why does music exist?  What a blessing to be able to create such magnificent sounds – first alone, in a relationship to an instrument that produces it, but then together with other musicians.  The cooperation, coordination, sheer magnificence of creating a whole so much bigger than its parts, left us both in awe.  What a joy to be part of bringing others such beauty – the gift of music that touches the heart, the soul, the imagination.  Invisible, but oh, so real.  Love is indeed Real.